Anne S. Ferro was named President & CEO of AAMVA in September 2014 after a 5-year assignment as the Administrator of the U.S. Department of Transportation’s Federal Motor Carrier Safety Administration (FMCSA). Ferro leads the association in supporting member agencies (government agencies in the United States and Canada who are responsible for driver licensing, vehicle registration & title services, and traffic law enforcement) to deliver safe drivers, safe vehicles, and secure identities.

Ferro also provides strategic direction to AAMVA’s key initiatives, including creating a technology solution for driver licensing authorities in the U.S. to ensure every driver can only have one license and driving record; developing a mechanism for government partners and businesses to validate a driver license when they accept it for identity purposes; and expanding public access to the national title car title system that protects consumers and fights fraud in the used-vehicle market.

Before joining AAMVA, Ferro was the longest serving Administrator of FMCSA after being appointed by President Obama in 2009. As Administrator, Ferro led the agency’s aggressive efforts to strengthen motor carrier safety and is credited with raising the safety bar for the industry’s operations across the country. Under her leadership, FMCSA implemented key measures, such as limiting the risk of tired truck drivers behind the wheel and prohibiting commercial drivers from texting or talking on hand-held mobile devices while driving. Ferro strengthened the agency’s partnerships with state and local governments to leverage aggressive, data-driven enforcement leading to the most dramatic reduction of industry violation rates in over a decade.

Ferro championed an agency-wide response to make FMCSA a great place to work in the Federal government for its 1,100 employees nation-wide. These efforts resulted in FMCSA ranking first in 2012 in the Department of Transportation on the Office of Personnel Management Job Satisfaction index.

Prior to her appointment to FMCSA, Ferro led the Maryland Motor Truck Association as its President and Chief Executive Officer from 2003 to 2009; served as the State of Maryland's Motor Vehicle Associate Administrator and Administrator from 1992 to 2003; and served as fiscal counsel to the Maryland General Assembly from 1986-1992. She received a B.A. from St. John’s College in Annapolis, Maryland, and then served as a Peace Corps volunteer in Cote d’Ivoire, Africa. Upon her return to the U.S., she earned a Master’s in Public Management from the University of Maryland. 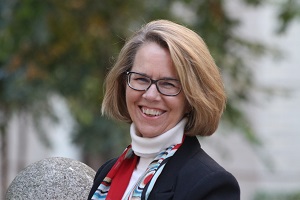